This unique cat gets its name from its ears. They originated in California and were the result of a random mutation in a litter of domestic house cats. Special care needs to be taken not to damage the delicate cartilage in their ears.

This breed is special because of its lack of an outer coat. Cornish Rex cats only have the soft, down-like undercoat fur that hides underneath the longer coats of regular cats. The coat is often curly, and is considered to be the softest of any cat breed.

Similar to the Cornish Rex, the Devon Rex sports a soft, wavy coat. Their coat does include a small amount of outer coat, although much less than other cat breeds.

Also known as the Diamond Eye Cat, the Khao Manee comes from 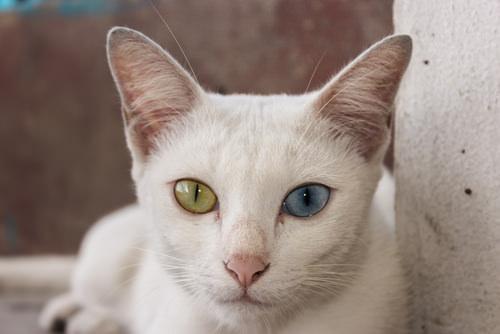 Thailand and is also a very rare breed. All cats of this breed are solid white with blue or gold eyes, or even one of each color.

It’s fairly obvious where this breed gets its name, because it looks like it just had a perm! LaPerms are a rex breed that have a tight, curly coat that comes in a wide variety of colors. Because of their coat, they have been shown to be a somewhat hypoallergenic breed.

Munchkins clearly get their name for their short legs. These adorable little kitties get their unique look from a genetic mutation that causes dwarfism. In fact, short-legged cats have popped up in every breed here and there for years. It wasn’t until recently that breeders started looking to create a Munchkin breed.

This breed gets its unique look from a genetic mutation that results in the ears being folded forward. It certainly adds to their personality, but breeders must make note not to breed two folded cats together – as they can results in more severe mutations in the offspring. Which means, as you may have guessed, that not all Scottish Folds have folded ears!

This fascinating breed differs from other rex breeds because of its thick, full coat. The Selkirk Rex has very long hair that curls, and is often preferred in the show ring due to it fuller look. However, the breed has been developed in both a long- and short-coated variety.

The Sphynx has been bred for its lack of coat, though it’s not a truly hairless breed. They have a very thin layer of down fur, and are unique in that their skin color is in the pattern their coats would be if they had one. Therefore, it’s not unusual to see striped or piebald skinned cats!

Perhaps the strangest looking breed on this list, the Ukrainian Levkoy is characterized by its lack of hair and inward folding ears. This breed is only recognized in Russia and Ukraine, and were selectively bred to create their fascinating look. Despite their location of origin, they do not do well in cold weather due to their lack of fur.

Fiction vs. Reality: 10 films that talk about global epidemics

Top 5 Mysterious Places Around The Globe